China. Its a country just a little bit to the North of us that has more than one billion people living in it. As such, its a huge market for Australian leagues and sporting clubs to tap into. Recently, to some fanfare the AFL and Port Adelaide Power announced the first game for premiership points to be played in China in 2017, however the AFL isnt alone in its Chinese ambition – so whats everyone else doing?

The first and most obvious candidate for discussion here is the A-league, which already recieves exposure in China through its involvement in the Asian Champions league and its association with the Asian federation. A number of Australian footballers also ply their trade in the Chinese Superleague.

In June, Football Federation Australia announced it had sold the Newcastle Jets for $5.5 million to Chinese high-tech LED product manufacturer Ledman Group.  According to the FFA’s David Gallop

“It’s a watershed moment for Australian football. It’s a marker of Australia’s growing engagement with Asia and points towards our future integration with the fastest growing football region in the world. We now have a direct investment from China into the A-League.”

In August, the Jets went on a 3 match preseason tour to China.

The former NSL club, Melbourne Knights have reportedly been in negotiations with a Chinese company for a joint A-league bid. Under the proposal, the Knights would continue playing in the local National Premier Leagues (state league top tier), acting as a feeder club for the A-League franchise and possibly a Chinese club.

Basketball remains a popular sport in China, and the NBL has recently secured a deal to broadcast every NBL live into the Chinese market. Two different broadcasters, Youku — described as the YouTube of China — and sports website Sina Sports, will broadcast all NBL games with commentary and graphics in Mandarin as the league looks to capitalise on the huge Asian market.

According to the NBL its part of a greater plan.

“It was always a lock-step plan — year one establish our basketball credibility in China, year two start developing a bit of traction so that in year three hopefully when we have Chinese team in the competition the concenmpt of the NBL is not coming as a surprise to the basketball community in China., that they already know who where are and where to watch.”

In May, the Gold Coast Bulletin reported that the NBL was seeking approval from FIBA and the Chinese basketball Association to have a Chinese team based part time on the Gold Coast within the next two years. The new club — comprising predominantly Chinese free agents playing with the permission of the CBA, and some imports — would play out of major Chinese cities.

During the Superleague period, it was planned that games would eventually be played in China.

In 2012 it was reported that Canberra was talking to Manly about playing a match for points in Hong Kong, but that match never eventuated. Club sponsors, including the Raiders sponsor, Huawei, were keen for a game to be played in the home country, but plans were abandoned when support from the NRL was not forthcoming.

In 2013, Channel 9 and the Chinese Government were reportedly supportive of the match happening, and the NRL had appointed an independent consultant to look into it further.

In August 2016, Fairfax reported that Canberra conceded that it was probably never going to happen.

In 2015 it was reported that the NRL supported a concept to take the game to China as put forward by former coach Paul Broughton. Under the plan , half a-dozen athletes, hand-picked from China’s 1.35 billion population, will be brought to Australia and placed with NRL clubs, while some coaches will be taken to China to expand the game there. However, a year later, Fairfax media reported that Broughtons was more or less being ignored by the NRL hierarchy, however shortly after the report the NRL evidently gave its approval to the plan. 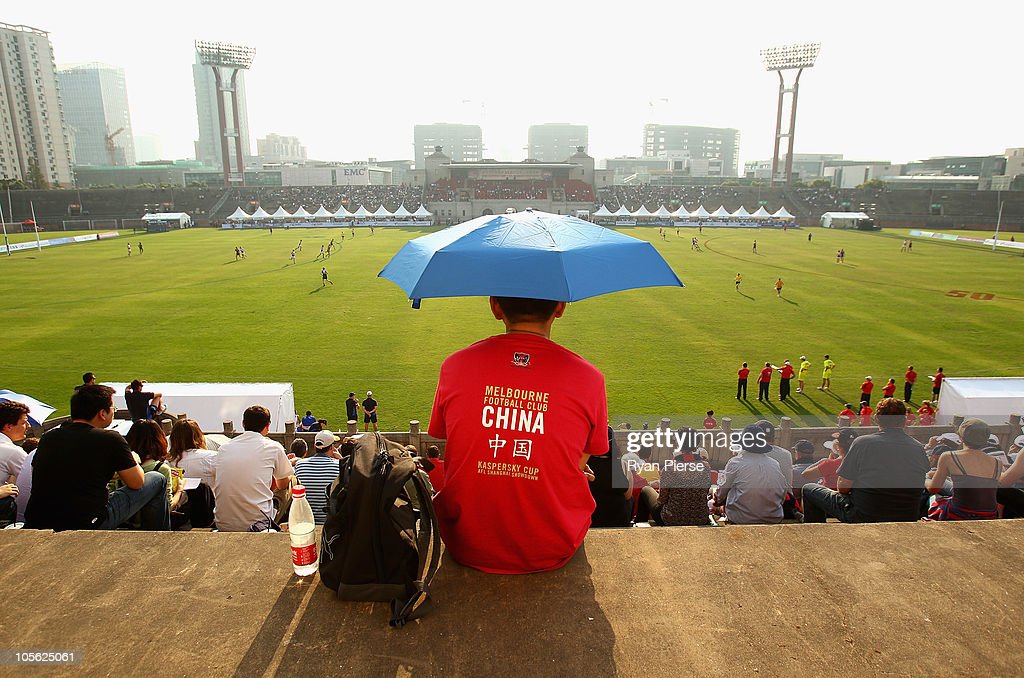 In 2006 it was announced that Melbourne Football Club were looking at playing a match in China in a plan backed by the AFL, AusAID and the City of Melbourne. The match, between Melbourne and Brisbane, was played in front of about 7,000 in Shanghai in October 2010.  The match was broadcast live in Mandarin and English to a large viewing audience in the Shanghai region on International Channel Shanghai and Great Sports Channel.

In 2011,  the AFL helped launch the first purpose built AFL oval in Tianjin as part of its ongoing commitment to grow Australian football in China. The $1.5 million project was a collaboration between the City of Melbourne, the AFL and the Melbourne Football Club.

In 2014, News Limited reported that the Oval built in Tianjin by Melbourne City Council at the cost of $1.5 million was overgrown and unused, and had a power pole sticking up in the middle of it.  AFL spokesman Patrick Keane said the league did not contribute to the oval and does not have a presence in Tianjin.

In April 2016, it was announced that the Port Adelaide Football Club and the world’s largest television network, China Central Television (CCTV) had reached a landmark agreement to broadcast AFL throughout China. The partnership also includes a 25-week documentary series titled The AFL Show co-produced by Port Adelaide and 57 Films and funded by the South Australian State Government to raise the profile of South Australia in China. The AFL Show, which debuted in April, is a 30-minute program that will be screened every Saturday night.

“Given China has a population of over one billion people CCTV has an extraordinary reach. We anticipate our weekly documentary show and broadcast games will attract an audience of nearly two million given they’ll be screened in prime time,” Mr Thomas said. “Allowing for this, our games against Essendon and Geelong will be the most watched home and away games in AFL history which is a great result for our entire club and corporate partners.

Ratings figures from the Power’s full-game telecasts to China reveal almost two million people are watching Port Adelaide’s weekly 30-minute show on CCTV . The April 8 clash with Essendon drew the same audience while the April 23 match against Geelong broke all expectation with more than 3.5 million viewers. (although the accuracy is questionable) This has prompted CCTV to extend its original agreement – to show at least three Port Adelaide games this season – to now show an AFL game from the home-and-away series each weekend. One in three games will feature the Power, making the coverage now total AFL exposure rather than just Port Adelaide.

Koch revealed the Power has already covered 75 per cent of the game’s cost that are said to be working to a $2 million budget. This comes from the $3 million backing from Shanghai real estate tycoon Guo Jie Gui and a new sponsorship from Australian company, Ausgold mining.