In 2008, the Telegraph sent some observers down to a Rabbitohs game at ANZ Stadium to check the attendances. The Telegraphs observers came up with a figure of 7,522 – the Rabbitohs later reported the crowd at 9,827. Crowd figures were then counted by the hosting club.

The Rabbitohs explained the crowd discrepancy away by saying that the Telegraph didnt have observers at unticketed gates for corporate areas, as well as stadium and club staff and officials.

In an emailed response to the Telegraph, the club said

“There were un-ticketed guests who entered via a staff gate that appear to have missed your scrutiny. Added to this are groups such as club staff, stadium staff, media, officials etc. who haven’t been counted by The Daily Telegraph clickers.”

On June 1, 2011, the Sydney Morning Herald reported that Melbourne Storm CEO Ron Gauci claimed that crowd figures were regularly inflated, and that most clubs were doing it although the Storm werent doing it in 2011.

“I believe it’s not isolated to Melbourne Storm or in fact the NRL,” Gauci said.”It was brought to my attention that most sporting clubs do that in terms of adjusting their numbers. We made it very clear when I arrived that we would record numbers as they are presented to us as an accurate reflection of the barcode scanned at the turnstyles. We record accurate numbers based on bar scans and as reported to us by Ticketek and then we’ll be able to do better year-on-year comparisons in future years.”

On July 26th, 2011, The Queensland Sunday Mail reported that there was a discrepancy between the Gold Coast Titans reported figures for all 14 of its matches, and the figures posted in the Stadiums Queensland Annual Report.

The Titans blamed faulty scanners at the ground.

“The discrepancies of between as little as 27 at one game and as high as 2209 at another have come about because there are issues with the equipment that scans the number of people in the venue,” the club spokesman said. “There was even one instance where the Skilled Park figure was actually higher than the Titans figure. We believe that Skilled Park and its contractor are working to rectify the discrepancies.”

On April 7th, 2014, ACT Sports Minister Andrew Barr claimed that sports crowds in Canberra were exaggerated in the past.

I think the crowd figures have been inflated in previous years, often by 2000,” Barr said.”If you were to go back and look at what the actual numbers were before the inflation of numbers, it wouldn’t reflect as much of a downward trend that people might think

Raiders CEO Don Furner said the discrepancy was likely to be in the hundreds.

“In years gone by, the scanners didn’t pick up the junior passes and the members are a sold seat, so there used to be a factor but no way [was it 2000]. The scanners now pick up everything, so we’re more confident everything gets picked up. There’s a lot less they allow us to put on top.”

In 2015, it was reported that crowd reporting had become more accurate with the installation of electronic counting machinesa at all NRL matches from 2012. The article claims that some crowd figures before that had been little more than educated guesses. In August 2017, Seven claimed that broadcasters had been caught using old vision of NRL crowds in order to to make attendances look bigger as the crowd crisis worsens in Sydney. This allegation appears to have originated from a single facebook post as far as I can tell.

DeciderTV reported that the match in question was actually the Round 15 Friday Night clash between the South Sydney Rabbitohs and the Gold Coast Titans, and not the Round 22 Thursday night clash as reported by some media outlets. The footage in question was only on screen for seconds during one of the match breaks and Decidertv suggests it was laughable that anyone could have derived any kind of crowd collusion conclusion from that.

A spokesperson for Fox Sports confirmed the production error telling DeciderTV “It was an error in judgment which we have addressed. This is not a regular practice of Fox Sports”.

On September 28th, 2017, The Courier Mail reported that the NRL had been over stating its finals crowds, saying that a recorded 107,835 people walked through the gates of ANZ and Allianz Stadium in the previous three weeks – almost 15,000 fewer than the 123,030 reported by the NRL, with crowd numbers for several games inflated by as much as 5474 people (Cowboys vs Eels on September 16). 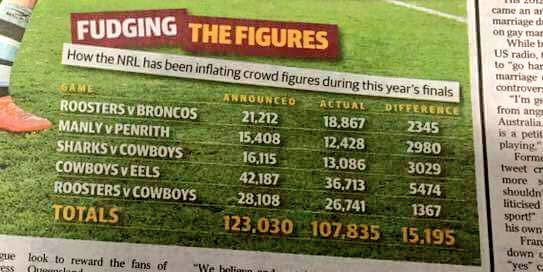